Every year the BBC runs their New Talent scheme in search of new creative individuals. There are many different categories ranging from scriptwriters to weather presenters. As luck would have it this years animation winner and finalists have just been announced. Check them out here. The overall winner is given the opportunity to develop their idea for a BBC3 series.

This year’s winner is a short film called Hobbies by Nick Mackie and Pete Avery. It features the voice recording of someone talking about their life and hobbies. Hmm, I’m sure I’ve seen something done by someone in a similar style somewhere else *cough* Aardman. Isn’t it great seeing really original ideas such as this winning all the top prizes… sigh.

You know when you make a bitter and sarcastic comment on your web site and then a few days later receive a pleasant email from the person who you didn’t expect to read the comment? No? Well, I do.

Here is an email I received from Nick Mackie, co creator of Hobbies, in which he straightens out a few things.

Thanks for the mention on your grand web site. Pete and me are really pleased and excited to have won BBC Talent. It has taken us many years to get to a position where we can do this.

We havenâ€™t just watched an â€˜Aardmanâ€™ film and thought â€œwe can do thatâ€?. So here’s a quick potted historyâ€¦firstly I worked as a senior Animator at Aardman for six years. I also designed and animated the Creature Comforts titles. As you probably know Creature Comforts is unscripted voices of the public as are some other great Aardman Films. Hobbies is SCRIPTED! There is a big difference in this approach. Pete and me spend a lot of time writing and developing the characters. As a big fan of Aardman and Nick Park I take it as a huge compliment that you see similar styles with our Hobbies and past Aardman work. ( I attach an image of â€˜Wolfieâ€™ from Hobbies No.1 â€“ I donâ€™t really see an Aardman style here). As a freelancer I will be still working for Aardman and have a couple of projects in the pipeline with them.

All the best
Nick 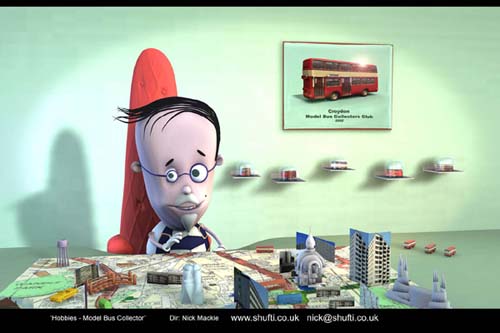 So there you have it. He could have said nasty things about me, but he didn’t. That makes him a gent. Now go make him more happy and visit his web site www.shufti.co.uk

Hello Just a quick update to mention that Sun will be screened at Animated Exeter… er… in Exeter.  More precisely you can see it in The Indies programme 14th February, 4pm–5pmand 15th February, 1pm–2.15pm. So if you are in the … Continue reading →