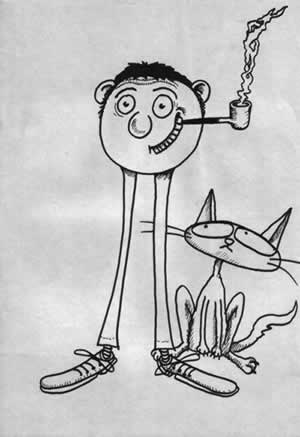 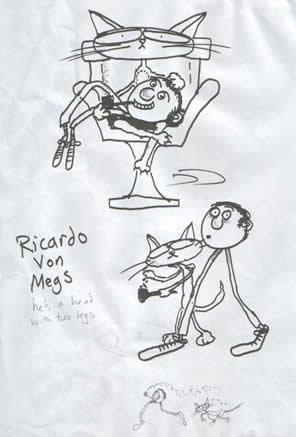 Dave Evans was working at A Productions when I first started there. He was busy producing his short animated film ‘Last Train’ for the MOMI animator in residence scheme. I had already seen some of Dave’s work because he was in the third year of his degree at the University of Wales when I was in my first. He’s a very funny and slightly odd person. He is able to think in unusual ways.

During one lunch break we started talking about how we would like to create an interesting and unusual new animated series. We discussed various concepts. However, one idea that we particularly liked was to have a storyteller who would host each episode. Dave quickly started coming up with names for the host. Ricardo Von Megs just popped out of his mouth along with the tag line “He’s a head with two legs.” It was bizarre but we liked it. Of course, if Ricardo is only a head with two legs then how does he pick things up? Simple, he has a cat that does all the menial tasks for him, like filling his pipe with tobacco. This then allows Ricardo to get on with the important business of telling his intriguing tales.

It all seemed so logical at the time. The idea never got any further than this picture that Dave drew. When Dave finished his film he moved away. The last I heard, he was married with at least one child. Just imaging the weird stories that kid is going to get told at bed time.