I based the character designs on the Action Network logo which features a black tree with printed coloured circles to represent bunches of leaves. I thought the characters would look nice if they had big colourful hair styles. I created a couple of character test animations which I sent to the BBC. Once the characters were approved I went on to create the storyboard and animatic. 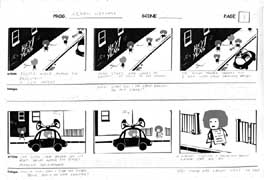 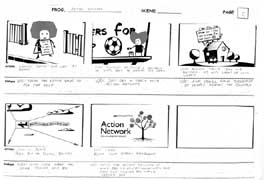 The artwork was created using a software program called Expression. It’s a vector based program which allows me to make changes to the artwork very quickly. Basically the images used in the storyboard and animatic were the actual images used in the final animation. Once again the animatic was shown to the BBC for approval. The first scene was tweaked slightly and I had to try several different styles of graffiti before they were happy. However, in general the whole process went very smoothly. I’ve rarely had a project where the client was happy with almost everything first time but this was a joy.

The whole sequence was animated in After Effects which is my favourite software package in the whole wide world. I particularly like the fact that I can link elements to one another. This enables me to build the characters with all their limbs connected to their bodies. It’s not as sophisticated as a character built in a 3D program but it’s enough for what I need to do.

Finally the finished animation was sent to the BBC who added the complete soundtrack. Then they popped it on the telly and all I had to do was tell my family and friends to keep a look out for it. It always feels odd when you see your own work on television.