The story for Fish Life just popped into my head one day. I’m not sure why. For some reason I was interested in the idea of a man becoming obsessed by a fish. Some of you may be aware of Michael Dudok de Wit’s beautiful short animated film The Monk and the Fish which also deals with a man’s preoccupation with a watery inhabitant. However, I don’t think my story is too similar to his. It’s certainly not my intention to copy others.

From my initial idea I quickly drew a thumbnail story board on a couple of A4 sheets (see below.) Sadly these are still the current story boards. I’m the only person working on this film so I’ve never felt the need to create neater boards. I’m making this film in a very relaxed and casual way. The story board basically acts as a rough guide as to where I’m trying to get to. 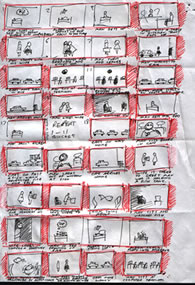 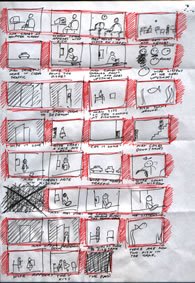 I also have no idea how long the final film will be. I tend to do as much animation as I feel is required for each scene rather than sticking to a set limit of time. This is bad film making. If I was doing this properly I would have locked down the structure of the film, drawn up a neat story board and produced a timed animatic. However, that seems like a lot of hard work.

This probably gives you an idea of why this film is taking so long. I’m a bit lazy.